Amateur orchestras attract loyal audiences who turn up whatever is on the programme, and this may account for the fact that both Adrian Brown of the Bromley Symphony Orchestra last week, and Philip Hesketh tonight, felt the need to provide an introductory talk. Indeed, the first half of this concert consisted of an extended introduction to Bruckner and his Eighth Symphony. There had been a time when the conductor had found the music of Bruckner intimidating, and hence he understood that there might be a need to provide a map for those in the audience who shared his erstwhile difficulty. With the help of musical examples played by the orchestra he demonstrated an analysis of the first movement based on the idea of repeated thematic bricks that built up and down to form arches. He characterised the contrasting nature of the themes, suggesting that unlike in Beethoven, where the composer often has opposing themes, the conflict between which forms the substance of the work, Bruckner’s themes have conflict within them but are not presented as struggling one with another. It’s a thought-provoking idea… He described the Adagio as a prayer, the climax of which rises to the heights only to be immediately negated.

The work is new to Maestro Hesketh’s repertoire, and he remarked in conversation after the concert that he had not studied other performances but had worked it out for himself. This may account for the fact that this was a refreshingly “untraditional” Bruckner performance. It had nothing of the slow monumentality which often characterises interpretations of this massive work, but it was rather as though the conductor had read “Allegro moderato” (the tempo marking for both of the first two movements) and taken it to mean what it says. The first movement had a lively urgency throughout, the lyrical second subject becoming more assertively forward moving than tenderly reflective, and the jabbing trumpet calls that usher in the coda, Bruckner’s “annunciation of death”, struck home as a headlong confrontation with mortality. The remorseless pianississimo repeated three-note falling motive that follows dispatched the movement in short order – no morbid lingering here.

The pounding Scherzo theme was announced forthrightly by the lower strings and then taken up by the orchestra, the sustained horns blaring superbly above the tutti in the triple forte climaxes. The acoustic of St Barnabas is fairly reverberant, and the orchestra layout extended far back into the chancel. (It would be good if the heavy brass could be situated on higher platforms – it seems a pity to go to the expense of hiring a resplendent quartet of Wagner tubas for them to be heard but not seen by most of the audience.) In Bruckner reverberation has advantages in the atmospheric echo that follows the abrupt cessations of sound, but disadvantages for clarity, especially when the chosen tempo is quite quick. In this Scherzo the music tumbled over itself wonderfully, the waves of sound glorious to hear – but there was much detail that was lost. The work had been introduced in terms of bricks and arches; to my ears the effect of the music at this tempo and in this space was less of architectural blocks than of repeated flowing waves of increasing intensity.
Amateur orchestras can find it hard to assemble enough string players of consistent quality to ensure adequate consistency of intonation and ensemble. Iona Boesche led the orchestra in exemplary fashion and, considering the varied abilities of her colleagues, they coped remarkably well with Bruckner’s all-pervading tremolos, and the intense full tone that the long Adagio requires. The cellos’ presentation of the second subject was particularly eloquent, and the Wagner tubas delivered their chorale very atmospherically. Maestro Hesketh negotiated the long build up to the climax sure-footedly, with a wildaccelerando racing to the summit. The repeated fragments of melody that close the movement seemed all the more telling for the refusal to retreat into sentimentality.

For me the Finale was perhaps where the interpretation was not quite so successful. At times the performance seemed a touch breathless, not enough of the “solemnly, not quick” that Bruckner calls for, but it had an almost Beethovenian energy about it which was certainly very compelling. The mighty coda suffered from the combination of the reverberant acoustic and the excited speed, the famous layering of all four movements’ main themes hard to discern amongst the welter of sound. Nevertheless, this was a performance of considerable integrity, deeply serious, at times very exciting, which gave the work a chance to speak with a welcome freshness and vitality.

What needs to be said is what a great orchestra the West London Sinfonia is. It has amongst its numbers some exceptional players – there was magnificent horn playing in this performance, woodwind solos of high quality, and the sound the full ensemble achieved in the shattering climaxes of this work was glorious. Their ability and responsiveness to their conductor enabled a really distinctive, thought-out interpretation, and thereby gave the audience at St Barnabas, Ealing, the rare opportunity to experience what was really a rather fine performance of one of the greatest of symphonies. 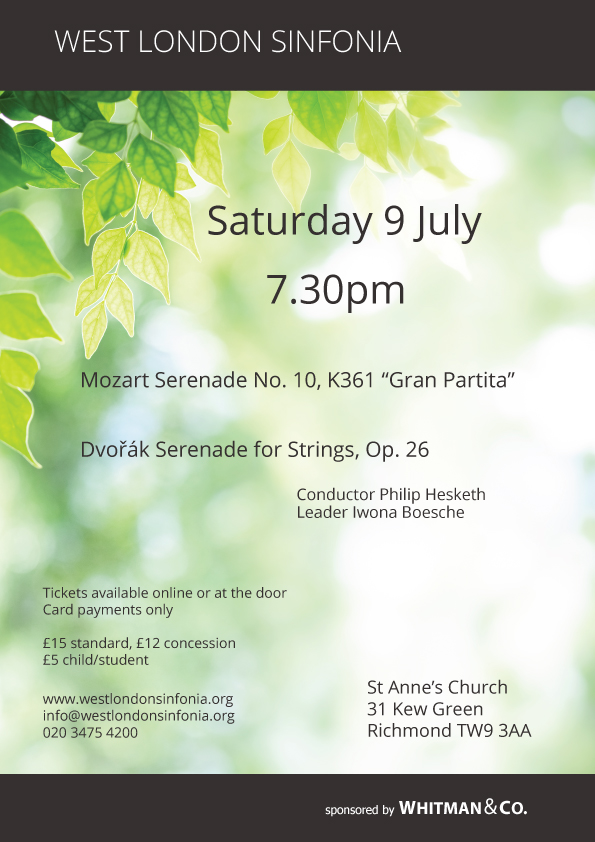